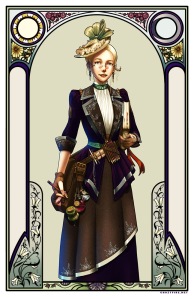 Steampunk is very chic and stylish these days.  It’s actually been around for a while as a subgenre of science fiction.  It has started to make its way into the mainstream through movies, tv shows, and fashion.  Many people don’t know that what they are looking at when they watch Warehouse 13 or Alice in Wonderland is that they are looking at some Steampunk vision.

Steampunk is a genre of science fiction that has its roots in the work of Jules Verne and others.  The early adventure penny novels in the U.S., evoking entertainment, and gadget-based solutions or rescue are early precursers to the genre.

There’s no denying the steampunk look is stylish, idiosyncratic, and funky.  It evokes bygone days, gaslight romance, and adventure. 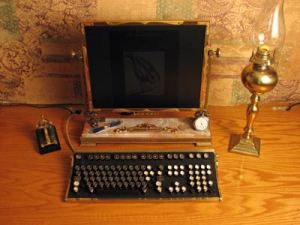 So why a steampunk librarian.  Do I wear the look?  I wish. It’s because the present day college library operates in the borderlands between the 19th century foundational ideals (and sometimes buildings) and the 21st century gadgetry, technology, whiz-bang stuff.  It’s all changing and it’s all changing us.  And yet there are things that remain the same.  What remains is an individual, idiosyncratic look of how information changes us and how we learn and grow wise from it.  Libraries tend to be in the center of this maelstrom of iconic traditional vision and current change and transformation.  We’ve been punked.   It is an exciting time to be in the information biz.